The Sheep that Shit Coleslaw

'The Sheep that Shit Grass' was a popular meme in the P2P days. If I remember correctly, it was introduced by Cory Doctorow as an economic model whereby the consumption of a material (grass) and a function (digestion) led to a byproduct that was itself consumable (more grass). This model may be contrasted with the consumption-only model, whereby the output (User Interface) is only consumable by a human, not a machine. 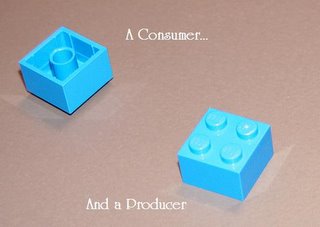 Peers
In peer-oriented systems, a node is a considered a 'peer' when it is both a consumer AND a producer. In a network, it is advantageous to have nodes not only consume value from the network, but also produce value back to the network. The more producers on a network, the more valuable the network is for consumers. 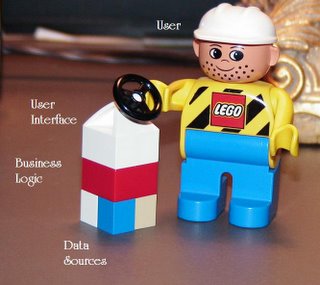 Non-Recombinant Systems
Traditional applications were often designed whereby the ultimate consumer was hard-coded at design time, and that consumer would be a human - and the vehicle would be some kind of graphical rendering. This is most likely a tradition held over from mainframe and client/server days. Today, many systems continue to fall victim to the same design center. Architects continue to assume that the data or functions would never be needed by anyone but a human and that whatever tool they built would be the final tool for consumption. In essence, the designers failed to anticipate future consumption scenarios that may have been out of scope of the 'Use Cases' that they built their system for. 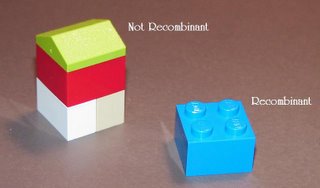 Recombinant Systems
When an application is designed so that its functions or data can be discovered and used, we say that the application is 'highly recombinant'. This means that the services that are offered can:
1. Easily be found (often on the screen that used them) and
2. Easily be called (the barrier to usage is low). 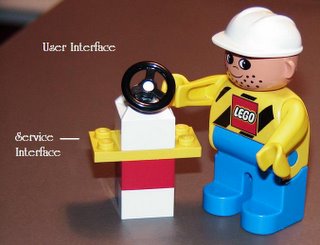 The key is to make sure that the people who use the systems can easily gain access to the services. As an example, it is common for Blogs to identify their feeds via the classic RSS image:

. Just as easily, we can tag our more structured SOAP services with the WSDL image:

. Publishing and advertising consumption scenarios must become second nature for organizations that wish to leverage the advantage of recombinant applications. 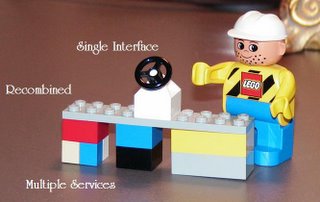 Enterprises and SaaS vendors must not only acknowledge that we are moving into an era of recombinant platforms but they must also take the necessary steps to enable the mashups, remixes, composite applications or whatever you want to call them. The future of software is about the creation and utilization of building blocks. It is about letting our users play with their Lego's. It is about allowing them to make coleslaw from their carrots and cabbage. It is about productivity and creativity. We do it for a few reasons: it lowers new software development costs, significantly reduces maintenance expenses, while simultaneously gives the users what they wanted.

You can have your carrots and coleslaw too.
Posted by jeff at 8:10 AM No comments:

As you work to extend IT capabilities utilizing SOA, a key for many organizations is a pilot program which enables the greater understanding and methodological deployment of Web services and SOA around a structured initiative. Join us as executives from MomentumSI and Actional will present best practices for selecting and implementing a successful SOA Pilot:

WHO SHOULD ATTEND: IT Executives, Enterprise Architects, Business Line Manager and Project Managers who are using or planning to use Web services or creating an SOA! Webcast will start promptly on February 2nd at 2:00pm EST/11am PST.

REGISTER HERE
Posted by jeff at 9:00 AM No comments:

The Value of Reuse in SOA

The MomentumSI SOA Team recently published a brief on 'Reuse in SOA'.

See:
http://www.momentumsi.com/SOA_Reuse.html
Posted by jeff at 8:27 PM No comments:

We have some early results on The Great Microsoft WSDL's Hunt. I've looked around myself and they're not as easy to find as you might think. I'm still encouraging any and everyone (including Microsoft employees) to send me the WSDL's!!

I also published the names of a few Microsoft products that likely have WSDL's.

The acquisition of Actional by Progress is yet another sign that the SOA space continues to mature. Consolidation is a necessary fact of all market places.

We've noticed that the 'acquisition trail' is becoming more and more complicated, so we've put together a cheat-sheet to help you out:

And congratulations to the teams at Actional and Systinet!
Posted by jeff at 1:35 PM No comments: 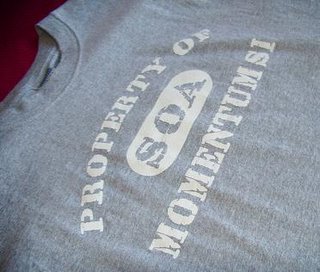 SHOW ME THE WSDL!!


MomentumSI is sponsoring a contest to see if anyone can locate the Microsoft WSDL's! Yes - anyone can win an SOA Tee Shirt, even Ray Ozzie!

All you have to do is:


When "The Great Microsoft WSDL Hunt" is over, I'll publish the results.
Posted by jeff at 11:38 AM No comments:

IMHO - here are some of the major differences between SOA-WS and SOA-CORBA. Perhaps Steve V./Eric N./etc. would be kind enough to give their list.

I'll leave the discussion on IDL/IIOP/Common Facilities/etc. to the experts...
Posted by jeff at 9:43 AM No comments:

"Jeff - I've seen 5 paradigm changes - this one looks just like what we were doing 10 years ago with CORBA. I'm not sure why you expect anything different..."

I often find myself attending meetings with 'legacy architects'. You know the kind - the guys that love to remind you that 'nothing is new' - hence, we shouldn't expect any new results.

These are tough questions that many people in the industry have attempted to answer. Some time back, Frank Martinez and I wrote our view:

I'd love to hear your feedback.
Posted by jeff at 3:07 PM No comments:

I've read quite a few predictions for 2006 - and my favorite - by far - was penned by David Heinemeier Hansson. His prediction on enterprise software follows:

4. 'Enterprise' follows 'legacy' to the standard dictionary of insults favored by software creators and users. Enterprise software vendors' costs will continue to rise while the quality of their software continues to drop. There will be a revolt by the people who use the software (they want simple, slim, easy-to-use tools) against the people who buy the software (they want a fat feature list that's dressed to impress). This will cause Enterprise vendors to begin hemorrhaging customers to simpler, lower-cost solutions that do 80% of what their customers really need (the remaining 20% won't justify the 10x -100x cost of the higher priced enterprise software solutions). By the end of 2006 it will be written that Enterprise means bulky, expensive, dated, and golf.

But let's get serious - Dell isn't going to be running its order management system from some Web 2.0 SaaS startup - nor will e-Trade be hosting customer financial data in some "non-enterprise" way. People who don't do enterprise development don't understand enterprise development; there are a million blogs out there to prove this. An enterprise can lose more money in one day because of a system outage than the combined revenue of every SaaS / Web 2.0 company combined.

Before 'enterprise Java', the term 'enterprise' referred to the scope of the deployment - not the architecture. 'Mission Critical' was the term we used to indicate a high degree of architectural integrity. David (and many others) are continuing to restate the obvious: we need multiple levels of architecture: light, medium, heavy. We need architectural profiles for each level. Our enterprise architecture teams MUST NOT force one design center for all application classes.

Is there a place for RoR, Spring, RSS, etc. in the enterprise? You bet. Will light weight solutions eat away at their heavy-weight counterparts? Yep. Is the 'enterprise' grade solution going to mean "bulky, expensive and dated" in 2006? Well, yea - it has meant that for years!
Posted by jeff at 5:42 PM No comments:

1. Virtually no enterprise software companies will 'go public' in 2006.

2. U.S. based venture capital will continue a downward trend with enterprise software leading the pack.

3. An abnormally high number of small ISV's will fail to raise their next round of funding. However, their revenue will allow them to crawl forward forcing them to ask the 'startup euthanasia' question.

4. On average, large enterprise software companies market valuation will stagnate; small and medium sized companies will mostly go down except for brief periods of 'acquisition hype'.

5. The number of 'Software as a Service' providers increase substantially but find low revenue in 2006.

6. The competition between Big-5 and Big-I (Indian) consulting increases significantly setting up a 2007 consolidation scenario.

7. The Business Process Platform becomes the accepted standard as the foundation for enterprise software.