Several peopled (too many to name) have recently compared SOA and WOA. Unfortunately, virtually all of the comparisons are really more of an analysis of 'Web Services vs. REST/POX/RSS/AJAX'. For those of us who 'do SOA' for a living, this drives us crazy. We fought for years to get people to quit thinking about SOA and Web Services as being the same thing. Now we have both analysts and press undoing the progress that we had made. Ugh. 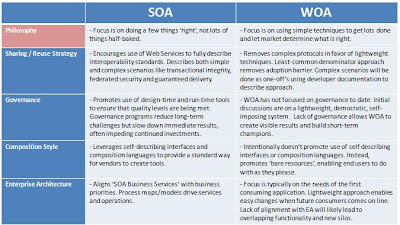 Please consider extending this little framework as a way to do proper comparisons. If you feel the need to add rows, I encourage it. If you don't like the contents of a cell - change it, but for the love of God, please quit comparing Web Services and REST and calling it "SOA versus WOA".


As for the cute one liners: "WOA is the SOA that works"... "SOA is the internal cloud" :-) You guys kill me. This is excellent nonsensical dribble.

However, the idea of 'building your WOA on your SOA' caught my attention. My deciphering of this statement is "use the EA & Governance practices to ensure business alignment, proper sharing and quality while also using lightweight protocols to drive barrier-free consumption and composition." Assuming this is what was meant... I'd agree! Perhaps another post on this subject...
Posted by jeff at 8:49 AM No comments:

Yesterday I wrote that the Google PaaS offering was not suited for the Enterprise primarily due to the language of choice (Python). This had me scratching my head. The people at Google aren't stupid - they know where the money is... why would they make this decision. And then it occurred to me.

Google is betting that the Enterprise will spend more money on SaaS than they will on PaaS. As Gartner said,

“Ease of use, rapid deployment, limited upfront investment in capital and staffing, plus a reduction in software management responsibility all make SaaS a desirable alternative to many on-premises solutions, and they will continue to act as drivers of growth.”

Google has made a bet that they can lure start up companies and next generation developers to their platform by choosing a dynamic language that facilitates mash-ups. And by doing this they will be the preferred platform for many next generation SaaS companies. But which ones?

The Google platform doesn't really offer any 'enterprise grade' functions. What it does offer is simple access to the Google world of social networking, ads, etc. In its current form the platform is best suited as a platform to enable SaaS for large audience applications (like social networking).

PaaS providers are still trying to figure out their target markets. Companies like Coghead are chasing the SMB market, hoping to attract customers who want to avoid setting up their own hardware and paying expensive programmers. SalesForce is clearly going after the enterprise ISV's. We're quickly getting to the point where each of these players will have to announce their target market to the world. The 'one size fits all' model won't last.
Posted by jeff at 8:21 AM No comments:

The recent PaaS announcements from Google and Amazon have grabbed the attention of the enterprise customer. Utility computing, clouds, pre-integrated platforms and business services are all sexy topics. But these same companies also realize that there are huge hurdles to adopting these concepts. They're big ships - and they don't turn easily.

How do I get PaaS?
Companies will ask how they can take advantage of this incredibly disruptive computing phase. I'm in agreement with Michael Nygard who feels that "everyone will want one". See:
http://www.michaelnygard.com/blog/2008/02/a_cloud_for_everyone_1.html


Michael goes on to say that he feels that Cloud Computing is currently at Stage 1 but it won't be long before large enterprises want their own. I'd argue that several enterprises already have their own cloud or utility computing environment. However, not many of them have a pre-integrated, platform sitting on the cloud ready for I.T. customers to use. There's a big difference between virtualized hardware and offering a software computing platform.

If you need to store data using the Amazon or Google offering, the options are clear. They have a couple services available - just grab the one you want and use it. To accomplish the same task in your average enterprise I.T. shop, you'd call up your enterprise architect, get a copy of the Technical Reference Model, identify the applicable elements, and then go to an infrastructure group to try and get them loaded so that you can test to see if they will work for their project. Ugh!

It will take a rebellion for enterprise I.T. to change but this act might be sooner than you think. Developers are already using Amazon and will quickly be messing with Google. They'll be telling management that they want to use this stuff because it is quick and easy to get going. (It's the same reason why people wanted off the mainframe and eventually ignited the client/server era).

In my opinion, Enterprise PaaS is inevitable. Organizations will not be able to switch to a purely outsourced model but will look for hybrid solutions, including creating their own PaaS. The PaaS model of the future will have to embrace multiple PaaS vendors (dare I say federated Paas). But, of course, the major infrastructure vendors will offer a PaaS-in-a-Box that mimics their own hosted model (think Oracle/BEA, IBM, SAP, Microsoft).

Who will win?
It's too early to say. Early indications are that it isn't Google. Their decision to go "Python-Only" is an extremely strong statement. Personally, I can't think of a single enterprise that considers Python part of their strategic computing platform (nor do they have armies of trained Python developers). The winner should be IBM, but they tend to think everything is a consulting problem. SAP isn't exactly known for their technology... Amazon has done some pretty cool stuff. Normally I would have discounted them, but who knows? Salesforce has an early lead but they don't have much of a footprint in the enterprise. Oracle/BEA and Microsoft both have interesting prospects in this space. If I were a betting man (which I am), I'd throw my chips on these guys.
Posted by jeff at 2:00 PM No comments:

If you aren't familiar with Microsoft's SOA Strategy, I'll sum it up for you:

Yesterday, I attended a Microsoft SOA event to get briefed on their strategy. To say the least, I found myself disappointed. After 3 hours of showing slides and demo's I finally concluded that Microsoft's SOA efforts to date have been a failure.

At the heart of their strategy is BizTalk. It's the one SKU that they can actually sell that is related to SOA. And if you listen to Microsoft, you'll be told that virtually all SOA paths lead to BizTalk. If memory serves me, BizTalk was released in Beta in 1998 and became generally available in December of 2000. This isn't exactly a new SOA product.

Windows Communication Foundation (WCF) is a fairly new component that was introduced in the last couple years as a pluggable framework to enable the Web service protocols.

The third part of the equation is Oslo. This mythical beast is basically the next version of a bunch of products which will help build on the vision of Software Factories. Oslo will not be 'released' as a unit, but rather each individual product will get released on its own timeline.

Robert Wahbe, the Microsoft executive in charge of the Connected Systems vision, must either be sitting on some elaborate game plan which involves a well-kept secret to acquire some actual SOA products, or he's in serious trouble. It is clear that Microsoft no longer has the killer instinct that it had years ago. But even then, the lack of results in this area must stand out like a sore thumb.
Posted by jeff at 6:43 AM No comments: